Venezuela President Nicolas Maduro has called Juan Guaidó, the self-declared interim president of Venezuela, a treasonous figurehead of a plot orchestrated by the United States to capture Venezuela’s vast oil reserves on behalf of wealthy US investors.

As a summary of what’s happening in the oil-rich South American country, Maduro couldn’t have done better. 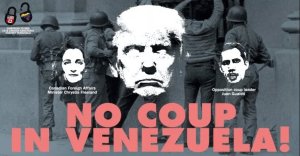 As the Canadian Press reported, Canada and other members of the so-called Lima Group, an ad hoc body formed to oust Maduro, encouraged the opposition to find a new face without political baggage around whom it could unite. This is a standard US regime change tactic, previously used to attempt to bring about a change in government in Yugoslavia and Zimbabwe.

Venezuela’s opposition, comprised mainly of representatives of the middle and upper classes, selected Guaidó, a young unknown. One poll indicated that most Venezuelans had never heard of him.

Soon after being anointed as leader, Guaidó slipped into Washington to secretly meet with the Trump administration, presumably to secure its blessing.

Guaidó then hastened back to Venezuela where the opposition followed through on the Lima Group’s pre-arranged plan to elect the young unknown as head of the National Assembly. According to a recent poll, the assembly has a 70 percent disapproval rating.

Next, Guaidó declared himself president—also, one gathers, part of the pre-conceived Lima Group plan– arguing that Maduro’s election was fraudulent and that the presidency was therefore vacant.

If that isn’t enough to paint Guaidó as a treasonous figurehead of a plot orchestrated by Washington and Ottawa, consider this: According the Wall Street Journal, Guaidó’s plan for reviving the sanctions-crippled economy is to open Venezuela’s vast oil sector to foreign investment, privatize assets held by state enterprises, and indulge wealthy investors.

In other words, the US-Canadian agent plans to substantially scale back the public sector, surrender Venezuela’s economic sovereignty, and turn over the country’s vast treasure trove of natural resources to foreign investors.

Is it any surprise that the United States and Canada, home to big oil and big mining, have taken a leadership role in sponsoring him?

Carried through, Guaidó’s plan would re-Americanize the Venezuelan economy and reverse the Bolivarian Revolution initiated by Hugo Chavez and backed by Venezuela’s teeming poor.

US oil companies would benefit, a matter US national security adviser John Bolton alluded to in a recent television interview. Canadian mining companies would make off like bandits. And Venezuela’s economic elite would return to the good old days. Meanwhile, the Venezuelan people would find, once again, that they exist to make the wealthy wealthier.

The Lima Group is nothing more than an ad hoc assemblage of countries brought together for the sole purpose of overthrowing the Maduro government in order to open Venezuela’s oil and gold industries to ownership by wealthy US and Canadian investors.

It excludes the United States to disguise the obvious imperialist character of the project, and it deliberately excludes members of the Organization of American States who oppose the blatant interference in a member’s internal affairs.

And here’s a warning.

Venezuela is only the first of three Latin American countries the United States is targeting for regime change, according to US administration officials. The other two are Cuba and Nicaragua, which, together with Venezuela, make up what the administration calls a Troika of Tyranny, but in reality represent states engaged in the project of putting the interests of their own populations ahead of those of North American businesses. The administration says that “the attempt to force out the president of Venezuela” marks “the opening of a new strategy to exert greater US influence over Latin America.”

The United States is no stranger to overthrowing governments. In the twentieth century, Washington undertook 41 successful regime change interventions in the hemisphere, an average of one every two and a half years. And that doesn’t count the unsuccessful ones, like the Bay of Pigs invasion.

In this century, the United States, working with Canada, overthrew left-wing governments in Haiti in 2004 and Honduras in 2009, and tried but failed to overthrow Hugo Chavez in 2002. The narrative of the failed overthrow of Chavez anticipated the one Washington and its Lima Group co-conspirators are using today—the president’s policies no longer work for Venezuelans and the people are rising to defend democracy.

We’ve heard it all before.