The US-led and coordinated intervention to overthrow Venezuelan president Nicolas Maduro by recognizing Juan Guaidó, the leader of Venezuela’s National Assembly as the interim president, has nothing whatever to do with restoring democracy in Venezuela (which was never overturned) and everything to do with promoting US business interests.

Washington’s imperial arrogance in effectively appointing Guaidó as president, attempting to go over the heads of Venezuelans—who alone have the right to decide who their leaders are—is motivated by the same concerns that have motivated other US interventions around the world: toppling governments that put their citizens’ interests above those of US investors. 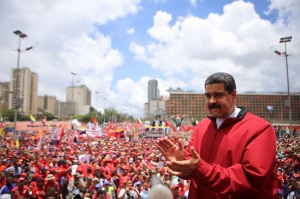 That Washington has a propensity to engage in destabilization operations against leftwing governments is hardly a secret. From 1898 to 2004, the US government undertook 41 successful regime change interventions in Latin America, an average of one every two-and-a-half years. And that excludes the unsuccessful ones, such as the Bay of Pigs invasion.

In almost every instance, US regime change interventions around the world have been motivated either directly or indirectly by commercial considerations, and were undertaken to restore or protect the primacy of US business interests in foreign lands. And in many cases, the interventions paved the way for the installation of rightwing dictatorships.

One ultimately unsuccessful US intervention was the 2002 coup d’état against Hugo Chavez, Maduro’s predecessor. Washington immediately recognized the coup, hailing it as a victory for democracy, but privately recognized it as a major win for US business interests in an oil-rich state teeming with potential profit-making opportunities for US free enterprise.

Washington disliked Chavez because the charismatic leftist leader promoted the welfare of ordinary Venezuelans, rather than pandering to US investors. But the coup against Chavez was short-lived. In a blow against tyranny, the regime change was quickly reversed and Chavez, the country’s legitimate leader, was restored to the presidency.

Determined to eliminate leftist governments in Latin America, Washington stepped up its campaign of economic warfare against the South American country, aiming to plunge its economy into ruin and the Venezuelan people into misery. This was a game plan Washington had followed countless times before and since, in China, Cuba, North Korea, Chile, Zimbabwe, Yugoslavia, Iraq, Syria, and Iran: ruin the target country’s economy, attribute the chaos to “the failures of socialism” and economic mismanagement, and wait for the people to rise in revolt against their misery.

The idea that Washington’s intervention in Venezuela has even the slightest connection to protecting democracy is laughable. The US government has notoriously supported a string of rightwing dictatorships throughout Latin America, including that of Augusto Pinochet, who was installed in the wake of a 1973 US-engineered coup against Salvador Allende. Allende crossed Washington by doing what Maduro, and a host of other Third World leaders, had done: put the interests of the local population ahead of those of corporate America.

In the Middle East, the United States’s closest Arab allies are a military dictatorship (Egypt) and absolutist monarchies, chief among them Saudi Arabia, whose abhorrence of democracy is absolute. Washington rewards Egypt with $1.3 billion in military aid annually, and robustly supports the Saudi tyranny.

Saudis regard their parasitical royal family as completely unacceptable. To protect itself from its own population, the monarchy maintains a 250,000 troop-strong National Guard. The Guard exists, not to defend Saudi Arabia from external aggression, but to protect the monarchy from its own subjects. The al-Saud family’s protectors are trained and equipped by the United States and its satellites, including Canada, which has a $10-billion contract to supply the force with armored personnel carriers, used to put down the frequent uprisings of disgruntled Saudi subjects.

The National Guard’s armorer, Canada, also recognized Guaidó as Venezuela’s interim president, dishonestly attributing its decision to follow the US-lead to its purported commitment to democracy. Ottawa has colluded with the dictators of Riyadh in their crackdown on long-suffering, democracy-deprived, Saudi citizens, at the same time supporting General Dynamics Canada’s efforts to rake in Pharaonic profits from arms sales to the democracy-hating Saudi despots.

Let’s be honest about a few things.

First, the agendas of US and Canadian political leaders are set by the economic elites and organized business interests on which they depend for campaign contributions, policy recommendations, and lucrative post political career job opportunities, and with which they’re tightly integrated personally and professionally. Accordingly, they care about the profits of US and Canadian investors, not about the welfare, freedoms or democracy of ordinary Venezuelans. Indeed, they secretly harbor contempt for the bulk of their own citizens and wouldn’t, for a moment, tolerate the flowering of an authentic, robust, democracy in their own countries. The idea that they care about the residents of a distant South American land is a fantasy for political innocents and the weakly naïve.

Second, US-led campaigns of economic warfare do make people’s lives miserable, and many people may attribute their misery to the actions of their own government and wish to see it step down. Others may recognize that sanctions are the cause of their misery, and may support regime change as a way of winning relief from foreign-imposed misery. Indeed, the logic of economic warfare depends on these assumptions being true.

Third, governments threatened by foreign-sponsored regime change face legitimate national emergencies. Maduro is not a dictator. He is the elected head of a government confronting a genuine national emergency engineered by hostile foreign powers. Measures taken by the government to defend its citizens against the determination of the United States to impose on Venezuela policies which cater to the interests of corporate America at Venezuelans’ expense are wholly legitimate; they represent the actions of a democracy against a US-led international tyranny.

It is important to remember that Maduro’s government, like Chavez’s, has sought to put the interests of ordinary Venezuelans ahead of those of US investors. As a result, it has provoked Washington’s enmity. The US intervention in Venezuela in recognizing Guaidó as interim president is emblematic of countless other US regime change interventions. Invariably, these interventions are targeted at leftwing governments that threaten the profit making interests of US businesses. The interventions have nothing whatever to do with democracy; on the contrary, where successful, they are almost always followed by rightwing regimes that build US investor-friendly business climates and integrate their countries economically, militarily, and diplomatically into the US-superintended and Wall Street-led global order. Foreign investors are indulged, and the local population is treated harshly. Far from spurring transitions to democracy, US regime change interventions aim to reverse democracy, and strengthen US global tyranny. The latest US-led intervention in Venezuela is no different, and is just a repeat, with local variations, on similar efforts in Syria, Iran, Cuba and North Korea.