Peace is “not what we’re offering,” says U.S. secretary of state

North Korea recently let Washington know that it will dismantle its nuclear weapons if the United States signs a formal peace treaty ending the Korean War. This, offered Pyongyang, could be negotiated through bilateral talks between the United States and north Korea.

Alternatively, Pyongyang said it was prepared to return to six-nation talks, aimed at denuclearizing the Korean peninsula, if the United Nations removes the sanctions it imposed after north Korea launched a satellite and conducted a nuclear test.

North Korea regards the sanctions as unjust, and with good reason – they are. Neither the satellite launch nor the nuclear test were illegal under international law.

No law prohibits a country from launching satellites, or even testing ballistic missiles — what Washington accuses north Korea of doing under cover of a satellite launch.

And since north Korea is no longer a signatory to the Nuclear Non-Proliferation Treaty – it withdrew after the United States re-targetted some of its strategic nuclear weapons from the defunct Soviet Union to north Korea in the early 1990s — it is not prohibited from developing and testing nuclear arms.

The reality that north Korea’s satellite launch and nuclear test were not illegal, did not, however, stop the United Nations Security Council from imposing sanctions, while at the same time overlooking Washington’s repeated violations of international law, a double-standard made inevitable by Washington’s veto and domination of the council.

North Korea says that it would not have built nuclear weapons had the United States not threatened it with military aggression. This is almost certainly true.

In the early 1990s, long before north Korea developed a rudimentary nuclear weapons capability, Washington announced it was targeting north Korea with nuclear weapons. A month later, Pyongyang withdrew from the non-proliferation treaty. Cause and effect.

Washington, which quashed the basis for a nascent independent Korean government in 1945, has stationed tens of thousands of troops on Korean soil since (but for a single brief hiatus.) U.S. warships patrol the fringes of north Korea’s territorial waters, and U.S. warplanes patrol the margins of north Korean airspace … and not infrequently, intrude upon it. The U.S. military conducts annual war games with south Korea – the south’s military budget is much larger than the north’s – keeping the north off balance and on an unremitting war footing.

Soon after 9/11, the United States ratcheted up its sabre rattling when the Bush administration listed north Korea as one of three countries making up an axis of evil, along with Iraq and Iran. The illegal invasion of Iraq, carried out soon after and for fabricated reasons, made two things clear:

• North Korea could be next.
• Disarming – as Iraq had done – was not a good idea.

In the face of Washington’s threats — indeed, because of them — Pyongyang stepped up its entreaties to Washington to sign a peace treaty.

At the same time, it worked on developing a nuclear weapons capability that would make the Pentagon think twice about another illegal war.

But Washington was dismissive of Pyongyang’s overtures of peace. Colin Powell, then Secretary of State, said “We don’t do peace treaties.” 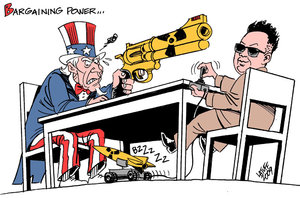 Today, a U.S. administration led by a Nobel Peace Prize laureate who wages wars in Iraq, Afghanistan, Pakistan, Somalia and Yemen, says it will only discuss a peace treaty if north Korea dismantles its nuclear weapons first. Washington promises only to discuss, not sign, a peace treaty. If Pyongyang delivers what the United States demands, Washington will think about signing a peace treaty…maybe. The United States, of course, won’t be dismantling its own nuclear weapons.

Washington also says that north Korea’s “appalling” human rights record stands in the way of normalizing relations, even though the appalling human rights records of Egypt, Israel, Saudi Arabia, Ethiopia, Colombia and Afghanistan, hasn’t prevented Washington from maintaining normal, if not favored, relations with these countries, including showering Israel, Egypt and Colombia with billions of dollars in annual aid. And that’s to say nothing about Washington’s own appalling human rights record – one replete with restrictions on mobility rights (i.e., travel to Cuba), secret prisons, prisoner abuse, extrajudicial assassination, unlawful detention and torture.

Clearly, the United States is not interested in peace on the Korean peninsula. Its military intimidation leaves north Korea no option, short of surrender, but to allocate a punishingly high percentage of its meagre budget to defense, with unhappy consequences for the well-being of north Koreans and the civilian economy.

Washington uses north Korea (and a few other sanctioned and threatened countries) to send a message about what happens when countries try to chart an independent course, especially one that is a top-to-bottom alternative to Washington’s prescribed US investor-friendly free market, free trade, and free enterprise regime.

Washington’s real interest is to engineer the collapse or surrender of the pro-independence government in the north, to clear the way for U.S. domination of the Korean peninsula up to China’s borders.

And so it is that an offer of peace and denuclearization on the Korean peninsula – one that would seem to appeal to any administration led by a deserving Nobel Peace Prize laureate – has been summarily rejected. “That is what they want,” sniffed the peace prize-winning warmonger’s secretary of state, “but that is not what we’re offering.”