…while this similar photograph of a young Palestinian killed by the Israeli military while playing on a Gaza beach has not? 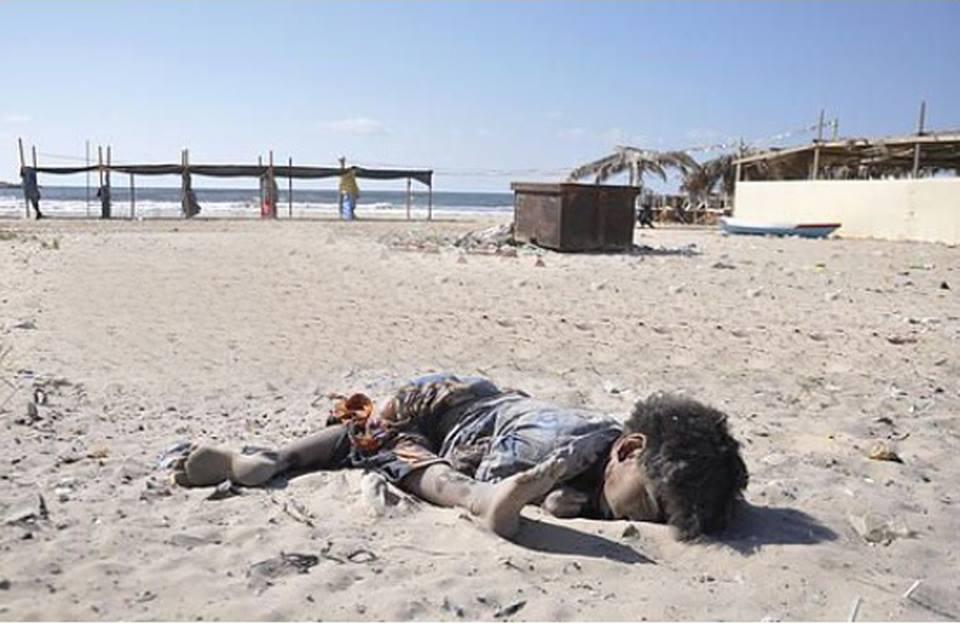 The answer, I think, has much to do with how politics pervades the mass media and uses it to draw attention to some events and not others.

Why has a media spotlight been shone on the pitiable plight of refugees, now, and not earlier? Syrians have been displaced in countless numbers by the jihadist rampage through their country for more than four years. For four years their plight has been largely invisible.

What of refugees fleeing the chaos created by the war on Libya—essentially a marriage of NATO air forces with al-Qaeda foot soldiers to oust a resource nationalist, Muammar Gaddafi, whom US oil companies could no longer abide?

Why has little attention been paid to the exodus of refugees from the ongoing tumult in Afghanistan, and Iraq?

And the little boy slaughtered on a Gaza beach: He too is forgotten, if he was ever really noticed in the first place.

Could the invisibility of these victims have something to do with reality that they were victimized by the United States, by NATO, by Israel, the supposed “good guys”?

And could the visibility of the drowned little Syrian refugee boy, on a beach, serve a political purpose—to blame the tragedy of the Syrian war on the supposed “bad guy”, Bashar al-Assad, a man the West wants to step aside from his job as president of Syria, because he, like Gaddafi, is a nationalist, and the United States doesn’t like nationalists?

Meanwhile, Saudi King Salman, not a nationalist, is illegally bombing, invading, and blockading his neighbor Yemen (with the assistance of the United States.) The United States likes Salman. Journalist Glen Greenwald recently wrote that “Saudi Arabia executed more than 100 people already this year, mostly by beheading (a rate of 1 execution every two days), and not only is it serially flogging dissidents, but it is reaching new levels of tyrannical depravity as it is about to behead and then crucify the 21-year-old son of a prominent regime critic, Ali Mohammed al-Nimr, who was convicted at the age of 17 of engaging in demonstrations against the government.”

Earlier, Saudi Arabia invaded neighboring Bahrain to violently repress protesters demanding a parliamentary democracy. They used Canadian-supplied light armored vehicles. The Canadian government has organized the sale of more light armored vehicles to the Saudi royal dictatorship. This is all pretty much invisible.

If the image of a drowned Syrian refugee is being used in an attempt to blame the tragedy of the Syrian war on the supposed “bad guy”, Bashar al-Assad, that too, would be another feat of deflection, of concealing the crimes of the West, namely, that the chaos of Syria that ultimately led to the death of a little child on a beach (and the death of numberless others in far more gruesome ways), is as much as the chaos of Afghanistan, of Iraq, and of Libya, a product of decisions taken by the United States and its allies to impose their wills, their politics, their militaries, their economics, their religions, and their proxies, on other peoples’ countries.

The United States has trained and equipped almost 10,000 rebels and sent them into Syria to foment chaos, misery, and terror, part of a covert CIA program. Its allies have showered fanatical Islamist militants with money, weapons and training, to destabilize Syria, to force a political settlement that would see the current government in Syria step down, to make way for one that is willing to cooperate with the United States politically, militarily and economically.

Two little boys lying dead on beaches killed by governments that present themselves as the “good guys.” Neither are.

Stephen Gowans is the author of The Killer's Henchman: Capitalism and the Covid-19 Disaster (forthcoming 2022); Israel, A Beachhead in the Middle East: From European Colony to US Power Projection Platform (2019); Patriots, Traitors and Empires: The Story of Korea's Struggle for Freedom (2018); and Washington's Long War on Syria (2017). For notification of updates, send an e-mail to stephen.roy.gowans@gmail.com with "subscribe" in the subject line. View all posts by Stephen Gowans