Israel, n. [L., fr. Gr. Israel, fr. Hbr. Yisra’el, lit., contender with God.] 1. An illegitimate and racist colonial, settler regime, founded on ethnic cleansing, maintaining a military occupation of 85 percent of Palestinian territory, relying on generous military aid from the United States, whose interests in the Middle East it looks after. The regime criminalizes legitimate resistance to its occupation and regularly flouts humanitarian and international law. 2. The territory occupied by this regime.

The basis of the regime is the Zionist goal of a Jewish homeland on territory inhabited by a Palestinian Arab majority. Everything about the regime and the resistance of Arab Palestinians can be understood as the inevitable outcome of the irreconcilable contradiction between the desire of Zionists to establish a democratic Jewish state requiring a preponderant Jewish majority on land in which Jews were a decided minority, and the reaction of Palestinians to their dispossession and oppression which the Zionists enforced as a necessary condition of achieving their goal.

In 1947, after Britain transferred its mandate to the UN, the world body introduced a plan to partition Palestine into three parts: a Jewish state, a Palestinian state, and Jerusalem, which was to be an international territory. While Palestinian Arabs made up two-thirds of Palestine’s population, under the UN plan, they were to be allocated only 42 percent of the territory. Having long sought self-determination, they were implacably opposed to the partition of their land. As the historian Ilan Pappe remarked, you don’t have to be a great jurist to see that forcing partition on a country to which the majority of its population is opposed is illegal and immoral. 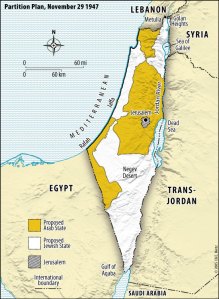 The plan was more favorable to the Jewish state. It would comprise 56 percent of the territory and would be home to 500,000 Jews and 400,000 Palestinians. Recognizing that a Jewish state would not be viable with Palestinians making up over 40 percent of the population, David Ben-Gurion and other settlers executed a plan to expel Palestinians from the territory the UN assigned to Zionist forces. When the British left in May, 1948, ending their mandate, Zionists seized 80 percent of Palestine (more than the UN plan had envisioned), driving 800,000 Palestinians from the seized territory and barring their return. In 1967, the regime conquered the remaining 20 percent in the Six Day War, along with parts of Egypt and Syria.

The regime is based on exclusion. Jews from anywhere in the world are permitted to immigrate to occupied Palestine, while Palestinians who fled or were driven from their homes in the now occupied territory are prohibited from returning. The Palestinians who remained in the territory seized by the regime, the so-called Arab Israelis, are treated as second class citizens.

Mixed couples cannot be buried together in a state-funded Jewish cemetery. Even more absurd, Israel is probably the only country in the world that does not recognize its own nationality. Israelis cannot be inscribed as Israelis in the state population register, but must be recorded according to their religious or ethnic origin. Every request by Israelis — Jewish and Arab — to be listed simply as Israeli has so far been rejected. The government argues that this would undermine the principle of Israel as a Jewish state. Meanwhile, ‘unrecognized’ Arab villages languish for decades without municipal services, while governments of both left and right have spent $15 billion on settlements beyond the 1967 border. (1)

Several right-wing rabbis have forbidden Jews from renting apartments to Arabs or giving them jobs. (2) Arabs inside Israel are denied security clearances, and, therefore, are denied the many jobs that require them. Compared to Jewish families, three times more Arab families live below the poverty line. According to polls, a majority of Israeli Jews favor expulsion of Arabs from occupied Palestine. [3] More than three-quarters say they wouldn’t live in the same neighborhood as Arabs. And three-quarters of Jewish youth describe Arabs as dirty. [4]

More important, however, than these day-to-day expressions of anti-Arab racism, is the racist character of Zionism itself – the idea that Palestine belongs to the Jews and not to the Arab majority that lived there, an idea which places one group of people, the Jews, above another, the Palestinians.

Most of the Jews who lived on Palestinian territory before 1948 were recent settlers, having arrived after WWI. After hundreds of thousands of Palestinians were ethnically cleansed from the territory under the regime’s control, these settlers, and those who came later, took over Palestinian homes and property.

Peace Now, the Israeli advocacy group, said in a report released August 26, 2008, that in the past year Israel has nearly doubled its settlement construction in the occupied West Bank in violation of its obligations under an American-backed peace plan. The Peace Now report…says that more than 1,000 new buildings are going up in the West Bank, including 2,600 housing units. It says that for the first five months of 2008, construction in the settlements was 1.8 times greater than in the same period of 2007. According to its report, more than half of the building is going on beyond the separation barrier that Israel has built in recent years along the border of and inside the West Bank. [5]

The combination of the UN plan, with its near demographic balance of Jews and Palestinians in the envisaged Jewish state, and Zionist ideology, which insists on a Jewish homeland in Palestine, guaranteed that Zionist forces would ethnically cleanse those parts of Palestine it could conquer by force. The regime’s refusal to allow the return of Palestinians is no less a form of ethnic cleansing.

Israel receives billions of dollars every year in military aid from the United States. On top of using the combat aircraft and tanks it receives from the US to oppress the Palestinians and enforce its occupation of Palestine, the regime uses its US-furnished military might to intimidate neighboring countries on behalf of Washington. It threatens to bomb Iran, recently bombed an alleged nuclear power plant in Syria, and destroyed Iraq’s Osirak nuclear reactor in 1981.

Everyone has the right to take up arms to resist military occupation – except, if you listen to Western governments, Palestinians (and also the Iraqis and Afghans who resist the occupation of their countries by US forces and their allies.) In order to discredit the organized resistance of Palestinians, Israel, the US, Canada and Western Europe demonize Palestinians who fight to liberate Palestine from the racist, colonial, settler occupation.

Meanwhile, many Westerners, including liberals, deplore the violence of Palestinians while proudly boasting that if their own country were invaded, they would be in the front line, guns blazing. Organized Palestinian resistance groups, including the Popular Front for the Liberation of Palestine, which seeks a democratic and secular Palestine, are officially designated as terrorist organizations by Western governments. Anyone who materially assists these groups faces stiff penalties. Criminalizing resistance deters people living in North America and Western Europe from expressing solidarity with the Palestinian resistance and dishonestly submerges the political character of its struggle. 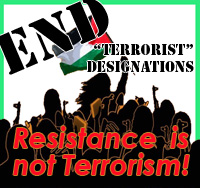 Palestinians who take on the might of the US-furnished Israeli military, firing crude, largely ineffective rockets into occupied Palestine, are not criminals; they are the dispossessed fighting for justice with the few means at their disposal.

The regime flouts all humanitarian and international law that stands in the way of preserving its racist, settler state, and it has being doing so from the moment in 1948 it rejected UN Resolution 194 calling for the unconditional return of Palestinians. The Universal Declaration of Rights holds that no one shall be subjected to arbitrary arrest, detention or exile and that everyone has the right to leave any country, including his own, and to return to his country. The regime has denied Palestinians these rights for over 60 years.

Jewish settlers from Europe arrived in Palestine, most after WWI, seeking to establish a Jewish homeland on territory inhabited by an Arab majority. When the British left in 1948, the settlers seized 80 percent of the territory, expelling 800,000 Palestinians, barring their return. The Palestinians who weren’t driven out or didn’t flee were, and continue to be, treated as second class citizens. Later, in 1967, the settler regime conquered the remaining 20 percent of Palestine it failed to expropriate in 1948. Jewish settlements were established in these additionally occupied territories – with settlements continuing to grow in one of them, the West Bank – squeezing Palestinians into an ever tighter space. A resistance developed, but has been criminalized, denounced as terrorist and targeted under the US war on terrorism (that is, war on organized, armed resistance to the imperialist encroachments of the US and its allies.)

The moral imperative of liberating Palestine from occupation is no less compelling than the moral imperative of liberating any other conquered territory. A liberated Palestine would ideally be secular, democratic, egalitarian, multiethnic and independent, not a military extension of the United States. The historic land of Palestine belongs to all who live in it and to those who were expelled or exiled from it since 1948 and their descendents, regardless of religion, ethnicity, national origin or current citizenship status. The character of a liberated Palestine is up to all who have a legitimate claim to live in Palestine to decide. It should never have been decided by the UN over the objection of the majority of its population, or by Zionists at the majority’s expense. The continued occupation of Palestine and the oppression of Palestinians and abridgment of their rights (without which the occupation could not continue) remains a blight on humanity whose end is long overdue.